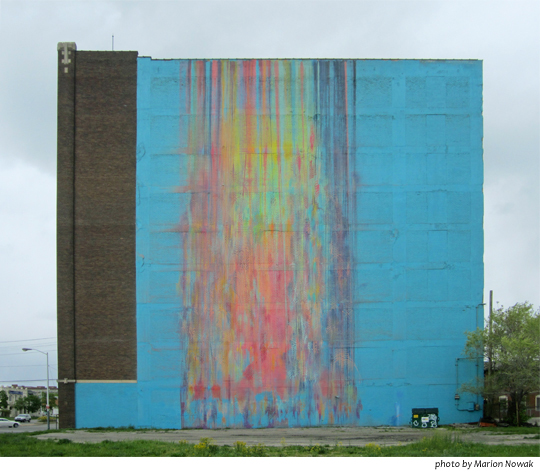 We are watching the film Detropia, right now, on PBS.  It was made three years ago but is not that far off about today.  The city administration  is still pushing hard for what it calls “right-sizing,” or “consolidating,” which is to shove people into central parts of the city and then, to be honest, walk away from everything else.  OK, that’s fine, but (a) who will pay these people fair prices for their homes? and (b) what will happen to the empty parts?

By the way, the city has already been turning off the lights and services for a long time now.  Not just in those empty ruins-porn neighborhoods either. It’s punitive austerity for all, in Detroit, just in varying degrees. Drive around in a neighborhood like Indian Village at night – no street lights, none.

Part of what I think is that, with climate change drying up the farther reaches of our country, many of the places that seem so prosperous now are going to burn up and empty out.  And where will people want to live?  A place where there’s, you know, clean water, no earthquakes, and space. A new frontier.  A place like this, maybe. And when that day comes, and it will, who will own the new frontier?

This entry was posted in Uncategorized and tagged Detroit new frontier, Detropia. Bookmark the permalink.