We were driving around Detroit the other day looking for pheasants, which have naturalized themselves all over town. Terry spotted some things moving around in the grass here and I rolled down the car window to take the picture. The birds – hilariously, they were a pheasant and a wild turkey – fled into the weeds. This house had been burned so recently that the sour hard stink of the crime rolled into the car.

In the last few days some idiot has been going around torching buildings that I have been looking at for years. It’s someone’s vicious little rite-of-spring hobby – probably a few someones. Not as vicious as the large-scale razing being ever more efficiently wrought by the city council, not as vicious and nasty as the mountain-on-a-city-block sized pile of black petroleum waste from Alberta that the Koch brothers are dumping downtown. But still, vicious.

This is abandoned Detroit, the Detroit deliberately created by the systematic withdrawal of capital, then driven ever farther down by crooks, racists, bureaucrats, politicians. The Detroit that is mostly black and poor, where one out of every four adults cannot read. This Detroit coincides most closely with wild Detroit, its empty places being claimed by wildlife. Ring-necked pheasants, turkey vultures, lots of raptors, herons, flocks of  blue jays, fancy little warblers, woodpeckers. Foxes. Coyotes. Tens of thousands of feral dogs. 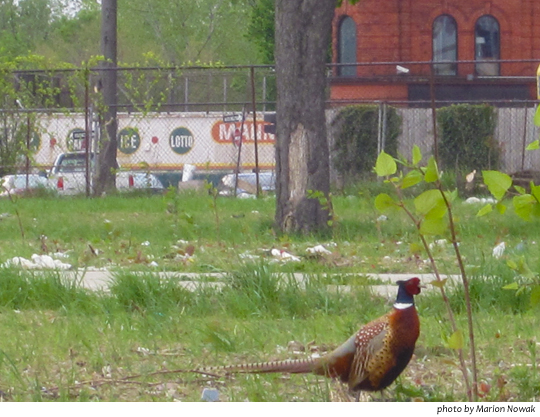 We found pheasants aplenty. Here’s one, just a couple of blocks from the arson site, picking around in an area almost wholly devoid of structures at all. Those buildings you see in the background are three blocks away, and for blocks in all directions, most of what you see is absolutely flat, rubble-strewn nothing. Here and there, a house, or a couple of trees or some small shrubs.

When you read about how well Chrysler and Ford are doing (and the Ford Fusion is the #1 car in the world), well, that hasn’t helped Detroit. There has not been an auto plant in Detroit in decades. The Chevy Volt plant? In Hamtramck, yo. Not the same city. The auto bailout has done pretty much zero for Detroit. Helped the corporations, though, didn’t it.

Sometimes we make a ruin, and sometimes we are made a ruin. And the ruin goes on and on, so that all we know is the crime, and that we are in it and of it.

This entry was posted in Uncategorized and tagged Abandoned Detroit, Austerity is bad, Detroit pheasant, Detroit wildlife. Bookmark the permalink.