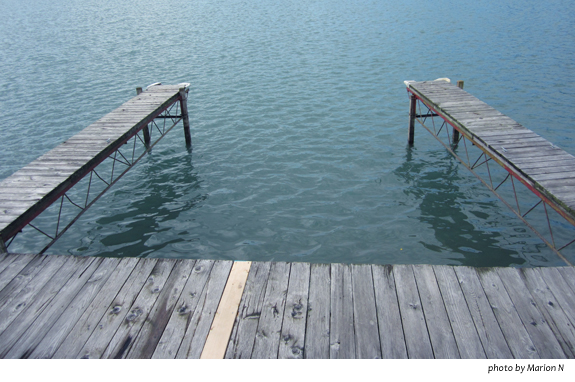 This simple dock, photographed a couple of days ago, is on Skaneateles Lake, one of the Finger Lakes and one of the legacies to us all of the last Ice Age.  Thanks to the retreating glaciers, we have these long beautiful lakes carved into old river valleys in upstate New York, we have flat, rich farmland in places like Ontario, we have the grasslands at the core of our continent and the lakes dotting the Canadian Shield. And we have the Great Lakes, which themselves alone hold more than 20 percent of the world’s fresh water.

Climate change and population growth are giving us a drier, thirstier world.  Places that simply do not have drinkable water, or any water at all, want our water, and plans are hatching to sell it to them.

In case you think a selloff of the Great Lakes is the stuff of Star Trek, think again. Private interests are hard at work on plans to transfer vast amounts of public water to thirsty places. Lake Powell is in the cross hairs; so is Great Slave Lake.  Alaska is in the process of letting a private company sell water from spectacular Blue Lake to a bulk bottling factory in Mumbai.  Two Canadian provinces, Quebec and Newfoundland, are temporarily putting off the start of international bulk-water export operations while the International Joint Commission, the US-Canada governing body of the Great Lakes, studies the water-sale issue.

And in case you think water selloff would have no consequences: the Aral Sea used to be one of the four largest lakes in the world.  Soviet irrigation projects changed all that. The lake is now 10 percent of its original size, in four different shallow basins. The water that is left is filthy with toxins and highly saline.  Its plant and animal life is dead.  What used to be the bottom of a fertile lake that supported a rich fishery is now vast stretches of flat shriveled desert. The surrounding land is irreversible desert. Dust storms – and even better, dust that carries salt, pesticides and fertilizers – are a regular part of life thereabouts. The wind lofts these storms across great distances, too, to ruin far-off farmland.  The dust sickens the people – part of the human toll is respiratory disease, anemia and kidney ailments.  Another part of the human toll is displacement – hundreds of thousands have fled. Desert, drought, hunger, poison duststorms, refugees: it is hard to understate the enormity of this decline.

And all this happened in almost no time at all. In 1960, the Aral Sea was as it had been for millennia. This gigantic, irreversible environmental disaster took only 30 years to achieve.

Is this our future?

Are our Great Lakes a commodity?